Shortly after the Day of the Dead celebrations, I packed my bags for Quito. My 3-month tourist visa was almost up and I was heading to the immigration office in Quito to renew it for another 6 months (the Visa 12:IX).

Of course, it was also the perfect excuse to take some time off and go travelling around Quito a little bit before returning to Intag.

As it turned out, I spent almost 2 whole weeks away – a very eventful 2 weeks.

I arrived in Quito on a Sunday afternoon and spent most of that first day getting all my ducks in a row for the visa application process. I got photocopies of my passport, print-outs of my bank statement, and passport-sized photos taken.

It was all a little nerve-wrecking as I had no idea exactly what documentation was required. The government website simply listed proof of funds as the only prerequisite, but other blogs talked about proof of leaving Ecuador after the 6 months, etc. It felt like I was going in blind, but there wasn’t much help for it.

I stayed at La Posada Colonial in the Centro Historico, which I loved. I got a private room (with lovely high ceilings, lots of light streaming in and attached bathroom) for all of US$12 a night! 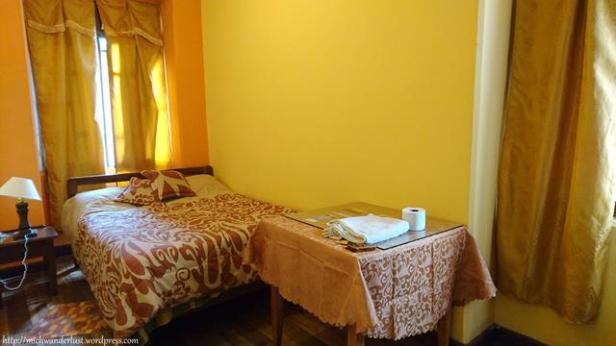 The next Monday, I went to the immigration office bright and early – about 7.15am, as I’d been advised to by a former volunteer who had gone through the same process a couple of years back. I spent a long time waiting in various queues but got through the process without any major hiccups and got out at around 10am. They said my visa would be ready in about 7 days.

I found an English bookshop and lost track of how much time I spent there. I’ve always been an avid reader but have been cutting down on my book-buying due to lack of space at home, but I really wanted some reading material for when I got back to Intag. I ended up buying 3 books (Never Let Me Go by Kazuro Ishiguri, The Horse Whisperer by Nicholas Evans and The Last Templar by Raymond Khoury), and later that day bought a 4th book, this time in Spanish – Love in the Time of Cholera by Gabriel Garcia Marquez.

(The Last Templar was a waste of money – I’ve never had patience for Da Vinci Code type of stories. No idea what I was thinking! However, Never Let Me Go has had friends raving about it and it lived up to all the hype. It’s the kind of book that stays with you long after you put it down.)

It rained heavily later that afternoon, but it was totally worth it because of this rainbow over Plaza Santo Domingo.

It was actually a double rainbow!

Later that evening, I happened across some kind of performance in Plaza Grande. I hadn’t been planning on passing through Plaza Grande, but I heard the music and wandered over. 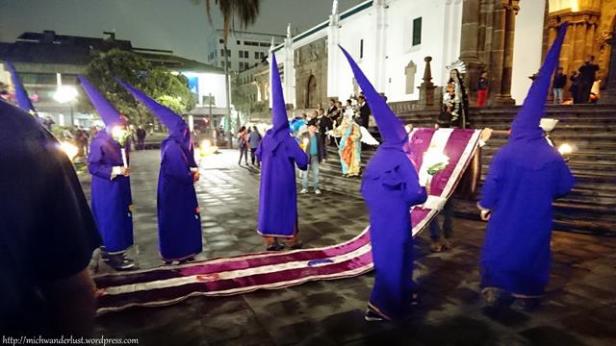 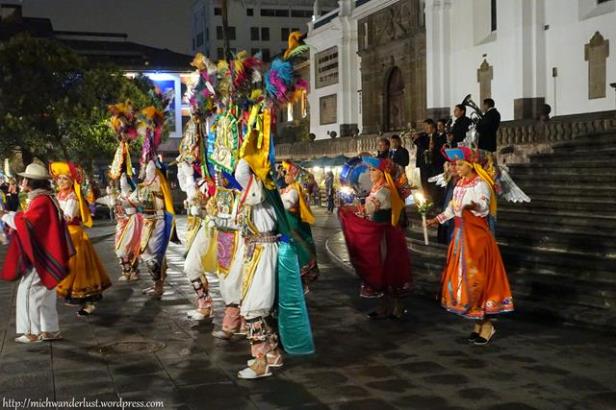 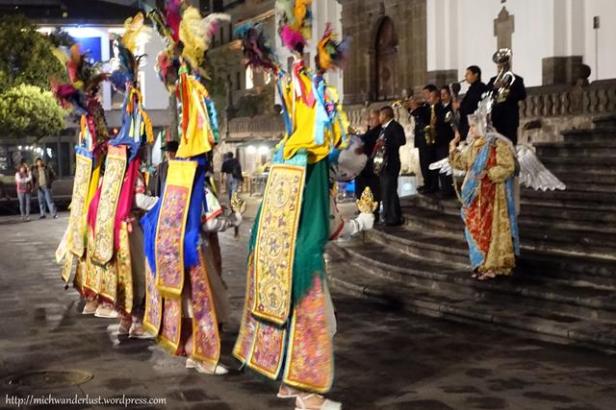 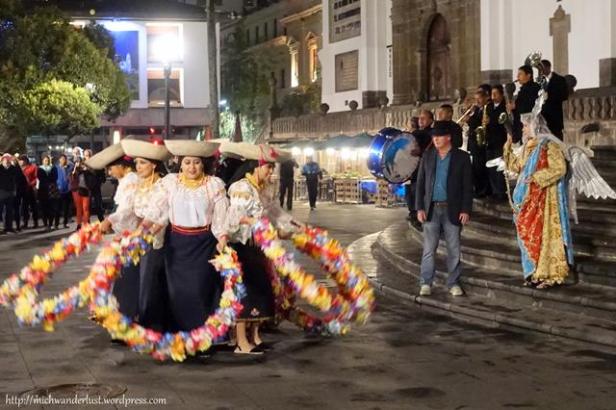 I still have no idea what it was about, but I enjoyed watching it immensely and would have stayed longer if I hadn’t had to rush off to meet my friend for Linda for dinner!

Linda is one of the girls from Yanapuma Spanish School I met during my first week in Quito. She’s interning there until February, and though we hadn’t spoken much since I left Quito, it was so good to see a familiar face and reconnect with her!

I didn’t know it then, but I would spend a lot of time over the next 2 weeks hanging out with her. And we always went to the same pub – Cherusker, near Plaza Foch (a very popular night-time hangout spot among both tourist and locals). The beers are relatively cheap (under $3 for a small glass) and they have a vegetarian burger! 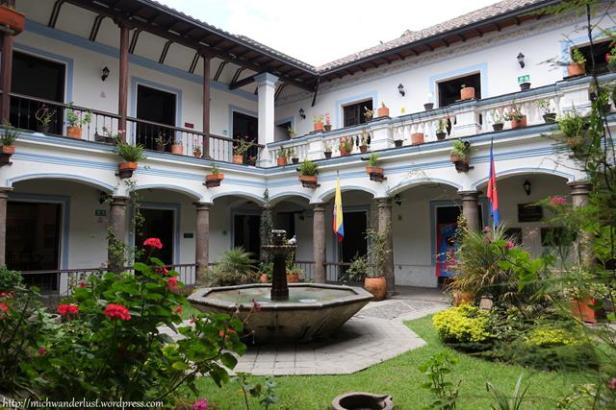 The next day, I visited the Museo Casa de Sucre, which used to be the house of one of the independence heroes: Antonio José de Sucre. It’s now been restored to what it would have looked like in those days and (perhaps most enticingly) entry is free!

My visit would have been altogether very pleasant, I feel, if it hadn’t been for another visitor – a much older Ecuadorian man who kept talking to me and wanted to “be friends”. It made me super uncomfortable and hyper-aware of the exits in each room. It also made me wish I had practised more Krav Maga!

Lesson well-learnt: if at all in doubt, just pretend not to speak Spanish and/or refer to friends just outside. It’s frustrating that I didn’t have the guts to just tell him to go away – I really wish I did.

My memory is therefore somewhat lacking when it comes to details of the following exhibits: 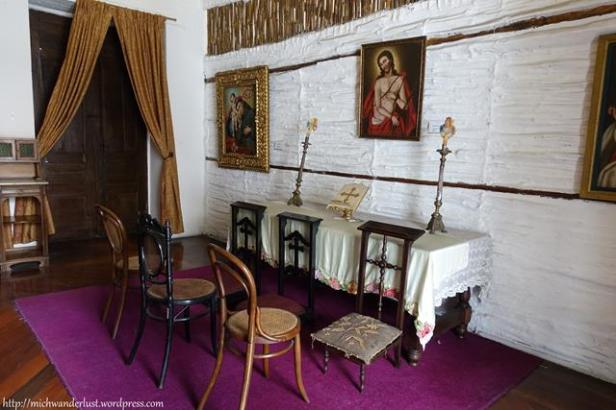 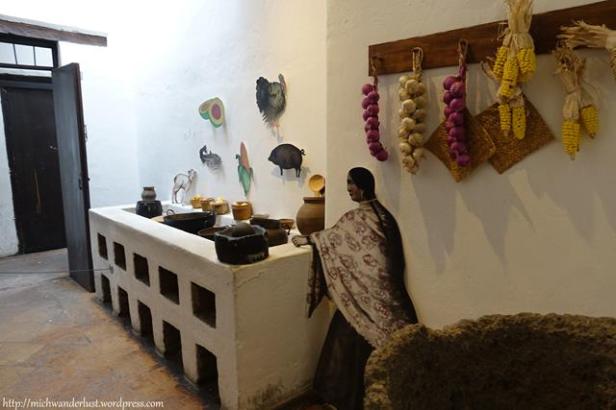 The stables (that’s one big saddle)!

After I left the museum, I was still quite shaken, so I walked around for a bit and had some froyo, but it wasn’t until I was on the bus to Otavalo that I could feel my spirits lifting.

Given that I had 7 days (or so I thought) until I next needed to be in Quito, I’d decided to head to Otavalo from Tuesday to Thursday to visit both families I’d stayed with, and then do a 3-day horseback expedition near Quito from Friday to Sunday.

My time in Otavalo passed peacefully, although the US election results came out the very night I arrived (8 November) and it was a very tough night and next couple of days.

I stayed with the family I’d first stayed with in Otavalo, and everything was as lovely as the first time. One small hiccup was when I was leaving and tried to pay them a little (the same rates that I’d paid to Mundo Andino Spanish School for my homestay), and the mother was very reluctant to take it – although she said that she could definitely use the money. She eventually only took it when I promised that I wouldn’t try to pay them anymore in  the future. I’ll just have to bring a truckload of fruits for them next time!

I also dropped by on my other host family and discovered – much to my surprise, that Rosa and Kevin were also visiting Otavalo for a couple of days from Rosario! It was really good to see them again (although I’d only been gone 3 days).

Another unexpected benefit was that Rosa was around when I got the email from the immigration office that threw all my plans into disarray, so she knew about the change in my plans as it happened without my having to attempt to explain over the phone.

Basically, the email said that I had to go back to the immigration office on that Saturday to make the second payment for my visa.

This meant that I wouldn’t be able to make it for the 3-day horseback riding expedition from Friday to Sunday, and after a frantic call to the ranch, I decided to go for a day ride on Friday and then a 2-day ride from the following Wednesday to Thursday.

I’d therefore only return to Rosario on the following Friday, instead of Tuesday as I’d originally thought. But I have no regrets at all, because the rides were fantastic and totally worth it. More on that in my next post!

2 thoughts on “Quito again (and a bit of Otavalo)”